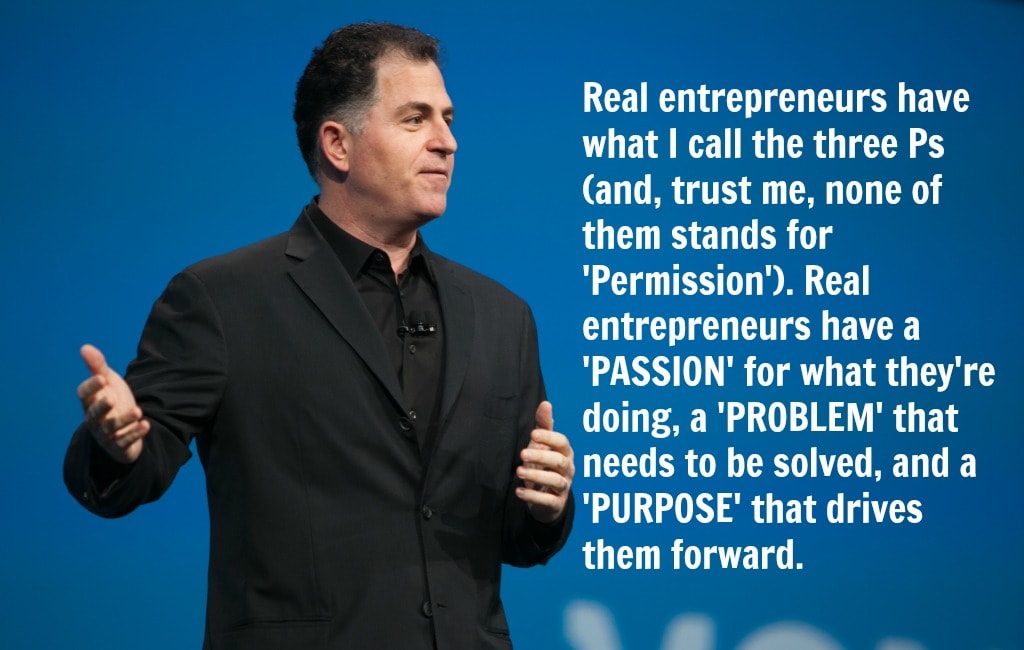 Who in this world is unaware of the ‘Dell’ Empire? Being into computer science myself, Michael Dell is one of the most influencing personality I have read about. Michael Dell founder and CEO of Dell Inc has a net worth of $20.4 billion. Very few people in this world have the courage to brave the tides and make the best out of their knowledge. There are countless curious minds in the world of entrepreneurship, always stressing their nervous system to unfold the mystery of being a successful entrepreneur. But in regard to this, Michael Dell said,

People ask me all the time, ‘How can I become a successful entrepreneur?’ And I have to be honest- It’s one of my least favorite questions, because if you’re waiting for someone else’s advice to become an entrepreneur, chances is you’re not one.

A person’s intelligence is never proportional to the success graph, he achieves for himself especially in the business cosmos. Plenty of brilliant minds lives life as an employee for one of the other company!

A healthy body breeds a healthy mind and vice versa.

Well said and followed by every successful person. From Michael Dell, Mark Zuckerberg, Bill gates to Anil Ambani etc., all business tycoons are fitness conscious personalities. Michael Dell used to ride bicycle 22 miles a day which is not as easy as it sounds. After knowing this fact, it’s crystal clear that Michael is Fitness freak person.

Michael dell’s innovation in manufacturing and PC (personal computer) distribution revolutionized the history of personal computers. Due to his direct sales strategy, the customer can order the PC on phone or online by avoiding the middlemen. Michael Dell said-

To be successful, what you have to do is have an acceptance of risk and you have to be pretty explicit about that, because if you don’t accept the risk, you don’t get any innovation.

Regrets are always born of a path not taken when a person takes a risk, he always gets into something innovated. For doing innovations, a person should possess the capability of thinking out of the box and Michael is having this quality from his childhood.

Related- How Programmers can Increase Productivity?

Passion should be the power that drives your life’s work.

I’ve been fascinated with technology since I was a boy banging around on my father’s adding machine. Back then I’d type in an equation; the device made some cool noises, and out came my answer. I was hooked.

Tinkering the electronic devices and hardware are the major secret behind Michael Dell’s success. In a nutshell, he was a tech-freak child who always used to tinker the electronic devices like telephone, television, radios or any other electronic device. He got his first PC i.e. Apple II at the age of 15 and he can’t control himself from disassembling it. His tinkering habit made him start Dell Inc. Somehow, he knew that he wants to be a businessman and he knew that he can do it and just need to keep his eyes on the ball and not to lose focus.

Like every successful entrepreneur, Michael Dell is also a learner but he is ahead of the curve. He used to be very curious about the new technologies that hit the market and try to implement it in the personal computers. His aim is to provide the personal computers with the latest technology at affordable price. It’s his unique trait that he learns things from his competitor brands too. Habits that made him stand out of the crowd are his Curiosity to explore the hardware parts, learn about their working and later implement the technologies in a different way in the hardware parts. He used to say that there is no better catalyst to success than curiosity.

There’s always existed a mastermind behind every successful business. Here that mastermind behind Dell Empire is Michael Dell. In context of his brilliance and bravado, the first president of the company Lee Walker said that I remembered that day of 1986 when dell came to see him for the first time and he ate my whole sandwich and while slurping, he asked me that can he be the CEO of his company, he had no money. That was the time when Walker saw both brilliance and bravado in this college freshman to take upon HP and IBM both. During the early years of his company, Michael used to work on PC 24/7 and 365 days in a dorm room and studied for exams just a week before.

The reason behind “Dell Inc” touched the roof of success is Michael Dell’s leadership. The main attributes of a good leader are discipline, trust, and his ethics. Michael does the work that causes the company to succeed and inspire his followers to do the same. Everyone is familiar with the powers of a leader but along with it, he is having many responsibilities. Till today, Michael has never neglected his duties and responsibilities towards the company. A good leader always has a future vision. Michael used to set a goal then give his 100% to achieve it. He is not the one who sits and enjoys the success but he always had another goal ready for his company. This trait of Dell’s personality helps the “Dell Inc” to touch the sky.

Philanthropy is the love for humanity in the sense of caring, nourishing, developing and enhancing what it meant to be human. Michael and his wife Susan created a foundation in 1999 named Michael and Susan Dell Foundation with a focus on ‘Urban Education’, ‘Childhood Health’ and ‘Family Economic Stability’. Dell’s approach towards philanthropy is to ‘tackle the problems that present the biggest opportunities’.

Like other successful entrepreneurs, Michael dell is also an avid reader and a mesmerizing writer. Reading brings the wisdom of words in the person. All the books written by him are very inspiring for the entrepreneurs and for a person thinking to open his company. His book “Direct from Dell” is his most famous book and a real masterpiece in terms of teaching about entrepreneurship. In it, he discussed his history and strategies that brought revolution to the computer industry.

I don’t take things for-granted, I still see myself as challenger, I fear from failure. I want to do better than yesterday. I want to succeed.

Rome wasn’t built in a day, its Michael Dell’s endless efforts and 24/7 dedication towards work that made him to create “The Dell Empire”. There is a well-said quote, “When there is a will, there is a way”. Michael dell proved this by his ultimate dedication. He still takes himself as a challenger and looks forwards to challenging opportunities. From the age of selling newspaper subscription on phone, making upgrading kits from his dorm room, becoming a CEO of a computer company, developing various PCs, taking the Dell as private company to direct marketing of PCs, nothing was served to him in the plate, he overcome all these challenges by dedication and passion.

50% of the problems and stress get automatically reduced by thinking optimistically. It is important to cope up with difficult life situations. Success and failure are the two sides of a coin named challenge. There are very few people in the world who don’t get depressed by failure but take it as a learning opportunity, Michael Dell is among them. He always sees a challenge as an opportunity with a positive vibe by keeping in mind that he can do it. He strongly believes that negative situations are temporary, limited in scope and manageable. On 29 October 2013, taking Dell Inc as a private company was his major decision that depicts his optimistic personality. His decision was opposed by almost every investor but he remained definite of his decision by thinking that he would succeed and need not to regret.

← Prev: 10 Personality Traits of Donald Trump Next: Product Based Vs Service Based Industry – Which one is Best? →