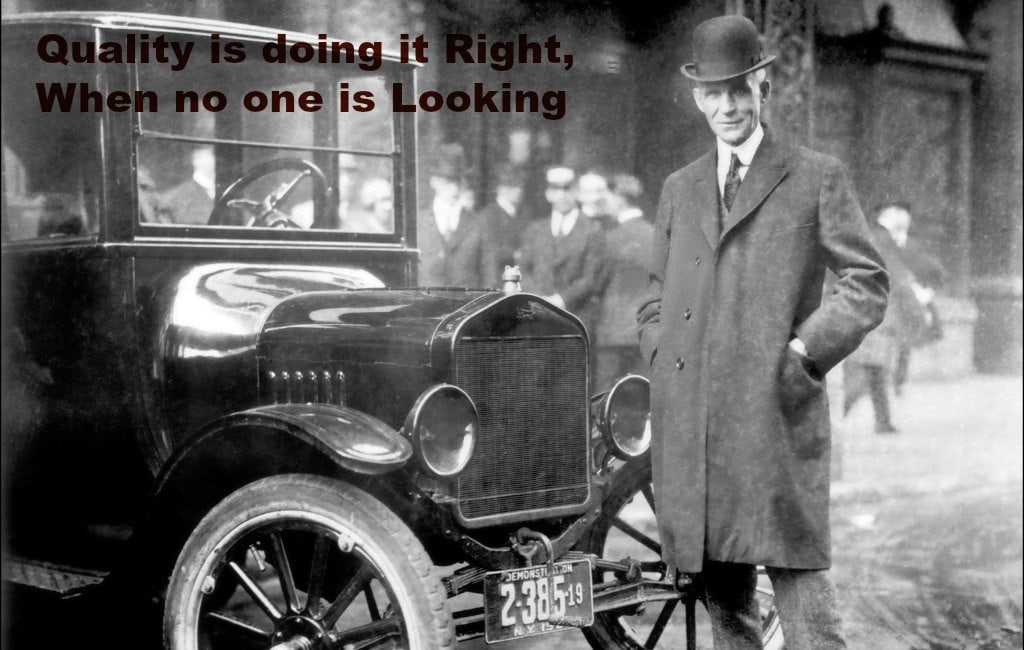 Henry Ford, founder of Ford Motor Company, the man who, if alive today would have been worth thrice of Bill Gates’ assets. A great inventor of his time, who had changed the perception of the world for motor cars during the 19th century. Henry Ford cherished quality above everything else.

He was a pacifier during the time of war. He was the farmer who constructed his own automobile empire and gave other industrialists a run for their money. A man of character and a lover of quality, Henry Ford became the brand he had envisioned he would be. 69 years later, Ford stands strong as a brand and a quality product. Let us take a look at Henry Ford’s personality traits who changed the vision and mission of automobile industry.

It is a ubiquitous fact that Henry Ford possessed one of the most curious minds. Since his childhood and teen years, he had obtained the characteristic of being an inquisitive individual. He was known to tear apart and then put back his siblings’ playthings in order to understand how they functioned.

He, later on, earned the reputation of a watch repairman due to his excellent success in dismantling and assembling timepieces of friends and neighbors. It is this curious mind of his that led to the invention of Model-T and Quadricycle.

Henry was a man who could never be satisfied with what existed at the current moment. His most acclaimed design was the Quadricycle which he worked on countless times to ameliorate. He had been working to improve the invention since 2 consecutive and later on, made it one of the most significant inventions in the history of the automobile industry. Furthermore, Ford designed Model-T which was the most affordable and recognized automobile of the 19th century surpassing any other machinery of the kind.

Henry Ford was an individual who had acquired the trait of being persistent and carried it without resignation. Henry, before being successful had initiated 2 other companies pertaining to the sole purpose of developing automobile machinery. Although, the companies he introduced, were soon shut down.

In the initial years, Henry was forced to work on his father’s farm which was a task he despised but was forced to perform in order to raise funds the development of his dreams to build an automobile empire. Eventually, he convinced and gained approval from Thomas Edison to build his brainchild the Quadricycle and from there, embarked on the journey of being one of the most powerful entrepreneurs of his time.

Henry Ford was a man who believed and prioritized quality above everything else. He believed that his name should reflect quality; hence he put it on the company. He always focused on providing the best of services and products to his clients under any circumstances. His idea of creating a product was to make sure that the design and material utilized for the manufacturing of that product had to be of quality. According to him, if a car under the name of his company malfunctions, he was the one responsible for not providing the best quality to the customers.The business magnet often stated,

Quality is doing it right, when no one is looking.

Henry Ford had high respect for what he did but he made sure he did not do it all. One of the most praised qualities of Ford was that he had formed a team and provided them with a handsome salary. He knew that his envisioned company would only flourish if he would hire the best people for his company. He was known to ignore the past of an individual and focused on his willingness to work for the company.

Henry personally hired his employees and made sure that they were taken care of. He had eradicated all the designations from his company and provided every employee with a crucial responsibility in the firm. He always encouraged his employees and treated them with a Saturday off every now and then. Ford was known to have introduced the 40 hours a week work schedule for his workers so that they would not be exhausted by the tiresome hours at work.

Ford had a sporadic habit of not trusting or shall we say not hiring accountants to keep track of his assets. He had been the owner of one of the most reputed companies in the world and managed his large amount of money without the help of an audit system.

Henry Ford was praised, as mentioned above, as the caretaker of his employees but many a time the automobile genius had an ulterior motive. His undaunted move of increasing the wages of his employees to $5 a day was one such incident. Rumor has it, Henry introduced the idea of the increment in order to attract the best engineers and mechanics from all around the city and consequently, he succeeded in hiring the best of all the places. Additionally, he had increased the wages to make sure that the employees bought cars manufactured by their own company hence, earning Henry more profits and free publicity.

Henry Ford was a man of great virtues. He strongly opposed the idea of smoking, drinking, and incompetent dads. In order to make sure he did not hire an individual bearing any such vices, he had formed a social department in his company. The department had set particular norms and these norms were in accordance with what Ford considered a respectable man in the society. The social department had the final say, in the hiring of individuals and who should benefit from the profits earned by the company.

A well-recognized fact, Henry Ford had played a very strong role in being the pacifier during the First World War; he strongly opposed the idea of the war and heavily belittled those who funded it. He was perceived as the harbinger of harmony and also had partaken in the senate election which he lost with a small fraction of votes.

Henry Ford was known as a great inventor, but he credited his success to the inspiration behind his innovative mind. He believed in a mysterious force or spirit of some kind which he claimed, guided him through the course of his life. According to Ford, this particular mysterious mastermind guides everybody toward their desires. He insisted that the mastermind sent brain message to everyone and what so ever Henry achieved so far was never by his own election but through the spirit forcing him forward.

← Prev: Chai Thela - A Journey from IIT to Selling Tea Next: First Eat - A New Direction to Food Startups →