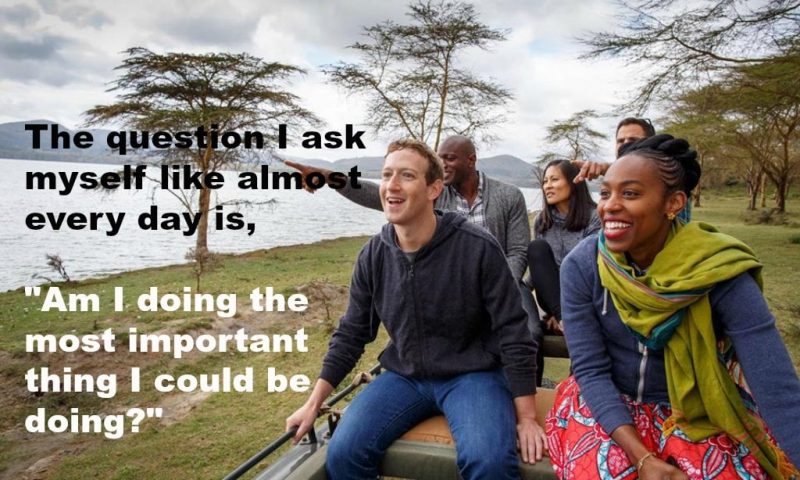 Mark Elliot Zuckerberg is the most successful American computer programmer and an internet entrepreneur. He is undoubtedly one of the most renowned names on the list of world’s most successful entrepreneurs. A self-made billionaire at a young age of 24, the dynamic social honcho has given us all a new horizon to the world of virtual reality- The Facebook. With the advent of his social networking site, his dream of making the world a much smaller place has indeed taken shape.

Who would have thought that what started off as a small project in his college dorm room would turn out to be a massive breakthrough in such a short span of time? As of 2016, the global business of Facebook was reported to be $27.63 billion of revenue and the site was being used by 1.86 billion people of the world. In his numerous public appearances, he has thrown light on some meticulous steps every entrepreneur must take to reach the zenith of success setting his success story and entrepreneur skills as a leading example. Though Mark Zuckerberg’s secret of success has endless pointers but let us have a look into 7 most prominent key tactics that made Mark Zuckerberg successful.

Mark Zuckerberg had a clear sense of vision in his mind before starting off his venture. This is one of most prominent reason due to which Mark Zuckerberg faced problems so easily and became successful. He was focused on what change his business idea would bring to the world. He wanted to create a social networking space with the vision of connecting the world and he was so inclined towards it that he even rejected big investment and partnership offers from big investment companies. Mark Zuckerberg even rejected offers from Microsoft and AOL during his studies to pursue his dream of higher studies and becoming an entrepreneur. He further adds that knowing what he intended to build was the key to shape his business into a successful venture.

Quoting himself as more than just a ‘one-hit wonder’, Zuckerberg has envisioned to make the use of internet a reality even in the developing nations as part of his interest in the future of human rights and social causes. In his attempt to change the global business landscape, he has met various leaders from around the globe in order to extend his technological prowess to address various social issues concerning the world today.

Mark Zuckerberg holds a high belief in teamwork as a tool to get things done in any organisation. He emphasises the need to build a strong team in an organisation as most of the things being accomplished around us are a result of constant toil and effort of dozens of people working in a cohesive environment. Even during his college days, he held a competition of hacking among other students to select the best and most productive coders for his company. Even now, he himself takes interviews of candidates in his own way by taking them to a park and asking questions.

In his company, he has been able to build a strong team of people who are competent in their key areas. He is quite open about the fact that he encourages in hiring people who excel in areas where he finds himself less competent. He understands the constrained ability of a person to deliver results single-handedly and therefore calls out to budding business enthusiasts to believe in the competence of others as well.

It is a popular saying that the more successful you are destined to be, the more you are subjected to criticism. Facebook CEO too had his fair share of setbacks even before the company’s inception. He was accused of ‘stealing’ the business idea of his college seniors resulting in many lawsuits against him. His endless legal battles over information confidentiality have resulted in Facebook being banned in many countries. He was once seen quoting, ‘I just wish nobody made a film about me while I am still alive’.

Some of the serious allegations against him were even true in the beginning. His lousy leadership and some of his unethical tactics did more harm than good to his naïve career back then. However, instead of dampening his spirits, he used these criticisms as stepping stones to building a successful career. He took coaching in order to become a better CEO and multi-lingual to gain proficiency in his business. He even took criticism on his clothing to his stride and started wearing professional suits during meetings. With vigilant actions, he continued to reap his innate desire to build Facebook and learn from his past mistakes. And with that attitude, he brought a revolution in the world of Social Networking.

Mark Zuckerberg recalls the best advice that he once got from PayPal co-founder Peter Theil,

Not taking risks is one of the biggest risks any entrepreneur can take that can decide the fate of his business so easily.

It might seem to be a struggle at first especially after working so hard on your dream project day and night. What’s important is to shun that fear and keep your head high while continuing to do big professionally.

Taking risks came so naturally to Mark Zuckerberg right from the formative years of Facebook. He turned down the advice from his co-founders to use Google Adsense due to low initial revenue and continued with the company’s existing business model. He ignored numerous calls and meetings and even turned down countless investors to focus on what he was doing at that time. Not only that, a massive risk came when he separated Facebook mobile app from Messenger. Eventually, over twelve investment companies showed their interest in funding his site highlighting the sharp-mindedness of the CEO to wait for the right time to take the big plunge.

Mark Zuckerberg’s personality clearly shows that he is very persistent in nature. In business, nothing ever goes the way one plans out to be. This is a harsh reality that holds true for every successful business, no matter how big or small it is. There is no such thing like an overnight success and one really needs to work hard continuously without succumbing to the numerous barriers that come along their way by defeating all odds.

Mark Zuckerberg has been an epitome of success in the present day generation. Persistence and ability to defeat all odds against him is what make Mark Zuckerberg successful. During his initial stint at his company, his co-founder opted out due to the initial failure. Even some of the company’s inside data got leaked but he didn’t let these things discourage him. Till date, he refuses to surrender to endless trials and tribulations set against him and strives to move forward. His persistence landed him a massive investment of $500,000 from PayPal co-founder Peter Theil in 2004 setting him off to a successful journey that kept him ahead of the curve.

Facebook has always had a long and interesting story revolving around a long list of competitors surrounding it. Not many people know that even before the launch of Facebook in 2004, colleges like Columbia and Stanford were already basking in the glory of the success of their very own college networks. Even on a larger scale, networking sites like Orkut, Friendster and MySpace were quite prominent.

However, with careful planning and smart execution, Mark Zuckerberg and his team rolled out their venture by learning from the mistakes their competitors made. They were aware of the debacle Friendster had gone through in lacking back-end infrastructure to support their growing network.Realising this, Facebook owners added one school at a time before relying on the handling potential of their infrastructure. Thus, they always had a sharp eye on their competitors and learnt from them to build the pathway for a successful venture.

For all successful companies, imbibing the right balance of the interests of their customers, employees and stakeholders is a crucial aspect. Companies often fall prey of some short-term stakeholders who lack genuine interests in your company’s vision and do not share the common interests as their owners.

Fortunately, Facebook has always been controlled single-handedly enabling Mark Zuckerberg to work towards the long-term vision for his company in changing the digital landscape of the world, instead of capitalising on short-term financial rewards. He was also keen on ignoring potential partners and service providers at first to save his company from deterring its goals. Believing in yourself is the key to success here and right investments and collaborations would fall in place when the time is going to be right.

Editorial Staff at BusinessAlligators is a team of business experts led by Lokesh Tanwar. Trusted by over 100K readers worldwide.

Which Business is the Best to Start With?

Empty Pocket – 10 Things I Learnt and Filled my Pockets Again

Empty Pocket is a situation when you can’t even afford one of the basic necessities.…