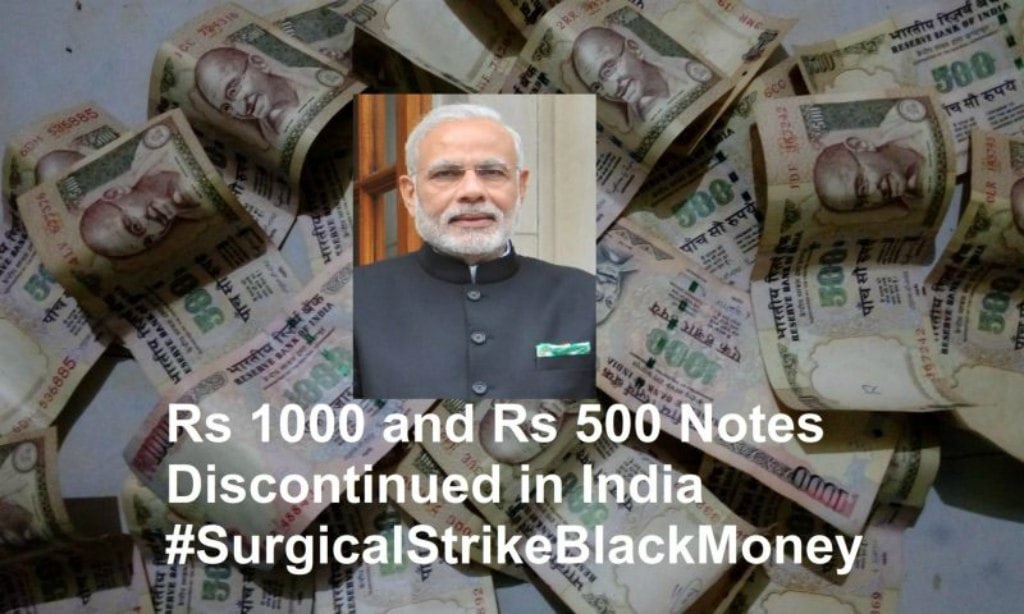 Prime Minister’s emergency announcement of invalidating and banning the Rs500 and Rs1000 currency notes came as a shock to almost everyone who first read it. Literally, no one could skip the news channel for that particular time stance. Hours of watching the news was followed by even longer symposiums.

It is the 2nd time that India has faced demonetisation. The news stroke the channels live at 8 PM first in Hindi then in English, where Narendra Modi clearly said after midnight today all Rs500 and Rs1000 notes would be ‘worthless piece of paper’. He also made a clear declaration that the notes must be deposited in the owner’s bank or post office accounts from 10th November till 30th December.

Honourable Prime Minister of India had been turning a blind eye to any comment that questioned the commitments he made to his people. One of his promises that caught many eyeballs was to bring back black money. Well, nothing speaks louder than words, and our Mr PM knows it very well how to back his words with actions.

Here are certain questions which occur to most people reading about the unanticipated sudden decision taken:

Reading the article below would fathom out these confusions:

All about money transaction and exchange

As been said by PM Modi prohibiting the circulation of 500 1000 Currency notes, it is of keen concern for the people to know where to get the value for their money.

Starting 10th November everyone can get their money deposited in vicinity banks and post offices. There’s no restriction of amount to this. However, the money that can be withdrawn has been limited to Rs 10,000 per day and Rs 20,000 per week. Not more than of old notes 4,000 INR value can be exchanged in cash, though. Speaking of ATM transactions, they won’t work on 9th November and some would still be non-functioning on 10th as well. This is capped with an amount of Rs 2000 per day for the time being.

All the limits will be incremented after 25th November.

Non-cash transactions are still unrestricted which include all sort of electronic money transfer, DDs, cheques, and Debit/credit/VISA cards.

Indeed, the full value of money would be given and new notes of Rs 500 and Rs 2000 will be introduced soon. Rs 500 note has a slightly distinct look, as shown in the specimen. 1000 Rs notes are yet not spoken about, whereas, pink coloured Rs 2000 note’s specimen is also out which has ‘The Mangalyaan’ picture on its back.

Now I guess, the cash related queries are answered. Any further questions can be asked in comments.

Let’s talk about the vision behind this paramount move by Prime Minister Narendra Modi who even between the critical American Election brought India in BBC tidings for this move:

Never has ever any government took a step like that. As, more than what people can imagine, this requires much hardship from the government’s and bank’s end.

Such high level of confidentiality was maintained that even Mr Prime Minister’s cabinet wasn’t aware of it till the evening. No one was allowed to move out of the office until the speech was ready to be delivered.

This move is to force people to channel their cash in their accounts. There is no choice given, the only non-restricted area is the deposition of money. This will neck the Income tax department as well, as how much money is being deposited would be registered.

The money has been invested through in form of various other bonds as well. There was noticed 76% growth on Rs 500 notes and 102% growth in Rs1000 notes in the unaccounted money. In the records of RBI, only 6% of that money was known. So, this step was to track that money as well.

There is a tremendous amount of Hawala money hoarded by many people which will come in the picture now.

The planning has been going on for months now, as it can not be a mere fortunate stroke of serendipity that this news is followed by the Income Disclosure Scheme, 2016. 1.30 Lakh Crore INR was disclosed on which 68,000 Crore INR tax was obtained by the government. Now, this discontinuation of Rs500 and Rs1000 notes is unveiled after Diwali. For a matter of fact, most of the sale and purchase in festive season is unbilled, which brings the whole profit of the same to the shopkeeper. Without billing, no tax is to be paid to the government. Hence, with this measure, it becomes arduous for the profit makers to define the earning.

We can certainly think of the various possibilities which this decision holds the potential of bringing. However, as we move forward the actual effects would get clearer.

Well, of course, there is no official statement regarding this but everyone is very well aware of the upcoming elections in Uttar Pradesh and even Punjab. Every now and then we come across news lines about expenditure made on buying votes and spending enormously over advertising the particular political party.This will also curb the problem of corrupt elections.

This is going to be challenging for the money that underworld owns as well.

Fake currency has been a critical issue for the government which is not only utilised by the citizens but even by the terrorists. So, to structure this horrendous wrongdoing, this step was cardinal.

4. To give Cashless Transactions a Thrust

Above everything else, this is to uplift cashless transactions throughout the nation.

However, the benefits are still debatable as it is just the beginning.

It will certainly be discomforting for the citizens, as it is the marriage season for the country and even in many other ways as well. But, for the sake of our nation, most people have readily displayed support. Though, there will be some backlash over this bold decision of Prime Minister Narendra Modi.