Today no one is unaware of Google and we always search our each query on Google only. But have you ever thought how Google started? Who are the founders of Google? Making of Google was really interesting. So I am sharing it with you. Google was founded and started by Larry Page and Sergey Brin on September 4, 1998. But Google Starting was not an easy one, Larry Page and Sergey Brin travelled a long distance to start Google and make it successful. Its unofficial slogan is “don’t be evil”. Within mere time span, it had now become the extensions of the brain from experts to novices.

Actually, Google is a journey, not a story. So, let’s go out on the Google Startup Journey which is full of difficulties 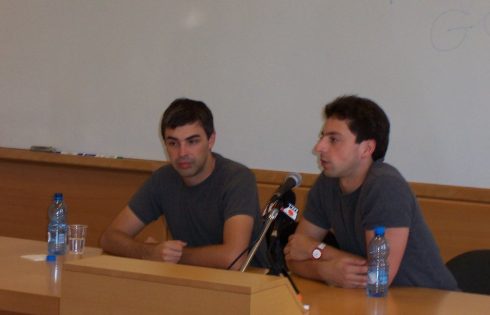 This title reminds me of HIMYM(How I Met Your Mother) series, which is all about friendship, craziness, togetherness and how they complete each other. Likewise, Google is a story of Larry and Sergey’s friendship and how in spite of being two different sides of a coin, they gave us something which people now cannot live without.

Larry Page and Sergey Brin met in spring of 1995, during new student orientation at Stanford University. Larry, on one hand, was calm and contemplative, Sergey on other hand was louder and an extrovert which likes to be in limelight. Both complement each other as sun and moon. They both belonged to the highly educated family and shared same curiosity about emerging wonders of the internet.

Related- Google First Downfall- When no One Supported Google

Larry Page cited once, “In Stanford, having a healthy disregard about impossible was considered as to open the gate of undefined possibilities.” Living life as the lines of Robert Frost,

Two roads diverged in woods and I took the one less travelled by, and that has made all the difference.

When Larry told his will download entire web onto his computer, it seemed as if he is cracking a joke to Rajeev Motwani, his adviser in Stanford. Both worked very closely on the finding ways to extract information from heaps and mountains of data. They founded a group called MIDAS; acronym of Mining Data At Stanford. Mythological meaning we all knows, the King with a golden touch. At that time they were some search engines, such as, “Inktomi” and most popular was “AltaVista”. But none of them gave accurate or valuable information. Hence, the duo got convinced that there had to be a better way to search the internet.

When Larry Page was using AltaVista, it encountered about something called “link”. He started digging up about the Link. And henceforth the task which seemed impossible took its initial steps and Page started to download all web links. Citations are important. Page got a breakthrough, the invented a link ranking system, which will rank. Now the question arises how to rank? The answer was given very simple, the sites with most links pointed towards itself will be more important that the lesser pointed links. It turned out, people who won Noble Prize have citations in the scientific literature, means your work is important because other people are mentioning it. This algorithm was called “PageRank”.

4. Birth of Google the God

On the internet, Google is God and is a very big topic of discussion. And this undisputed God was about to enter in our lives, but with a hitch. In early 1997, Sergey and Larry had applied for their PhD thesis; the “PageRank” was implemented in a search engine called as ‘BackRub’. They didn’t set out to build a company, but they set out to do a better search. A search which led them to something no one had ever imagined. In fall of 1997, they needed a new name for the search engine. So, the mind storming sessions started. Sean Anderson, office mate of Brin and Page, came up with “Googleplex”, which means a very large number. Then later, they shorted it to “GOOGLE”. He typed it as G-O-O-G-L-E. In evening this name was registered, and the most of the most innovative and successful company name was registered with the misspelling. On next day morning, they came to know that the actual spelling of term Google was G-O-O-G-O-L, which means 100 zeros after 1. In the early phase, it was launched in Stanford campus.

Every success stories are not woven on the same day. It would have taken countless hours and indefinite white cells to fight with grey cells. It wasn’t that they sat and said, ‘Let’s build a multi-dollar company’. They sat together to solve interesting problems and stumbled on great ideas. They both had ideas and they instead of keeping to themselves, they shared.

Every success story needs its heroes, who have all the power, knowledge and confidence that they will conquer. As Page and Brin were exceptionally smart and had the passion for fighting for their ideas. Most important part of problem-solving is an attitude towards it. As the database of Google grew, they needed more computers and money to buy them. Short of money, instead of buying computers, they bought parts. They scrounged around loading docks looking for unclaimed computers. Their advisors funded them with $10,000 from Stanford Digital Libraries Project. They learned that assembling and stringing together the inexpensive parts, how much you can accomplish.

We should learn from everything. After studying AltaVista, Page invented PageRank, the backbone of the searching algorithm of Google. Great things are not always complex.

At last here are some words about Google from John Hennessy, a top computer scientist who is president of Stanford University and board member of Google. He says that the firm is unique in today’s bifurcated world of sophisticated software and hardware companies because it is a leader in both areas. To run its search and search related services, Google runs patented, custom-designed programs on hundreds of thousands of machines that is also custom builds. Most distinguishing part of Google is that all its employees assembled and customise all the personal computers company uses to carry out searches. They run largest computer system in the world. The hardware would be the key factor in being able to do search efficiently; hence they are replicating their own customised hardware. Hence it needs more capital to launch a search engine in competition than anyone can think.

Google didn’t stop at search engines, Googleware and the lucrative Google Ad system are the glimpses of a very large and magnificent picture of Google, which has now become Alphabet Inc.

Sources: The Google Story by David A. Vise

← Prev: 6 Ways for Lazy People to Make Money Next: Google First Downfall - When no One Supported Google →

5 Most Famous Google Mergers and Acquisitions

Every acquisition and merger is the gap a CEO and VP sees a strategic gap in future, that gap is filled with an...

Google was never a conventional company and it never will be, as cited by Sergey. From starting of Google till date...

After the first downfall, Google was on the ground. But founders of Google Larry Page and Sergey Brin never gave up....