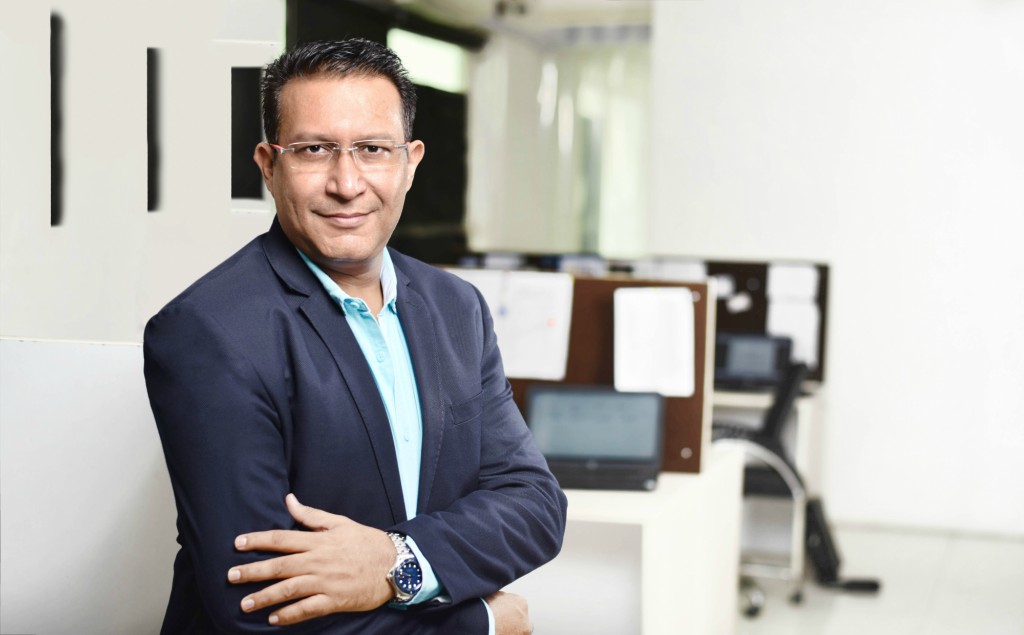 Vikas Bagaria- A serial entrepreneur, a seasoned businessman from 20 years, and an Angel investor with a very innovative mind.

Vikas Bagaria started his entrepreneurial journey in the year 1997 with his family business V.R. Forklift. Later, he started ventures such as SRV-Control in 2002, SafetyKart.com in 2013 and the most recent one PeeSafe- Redcliffe Hygiene in 2017. The best part about his business ventures is that none of them failed. He has also done some major investments and has been linked with some of the well-known businesses like Wittyfeed, Innov8 etc. Vikas is even helping Indian Defence, Aerospace, Power Transformer and Energy companies in terms of a conditional based monitoring system.

The incident that led to the invention of PeeSafe is quite gripping. While Mr. Bagaria was running SafetyKart, once he was traveling to Gujarat with his wife but she fell sick on the journey and they had to drop the trip in the mid-way. As soon as they reached Delhi and got her medical help, his wife was diagnosed with UTI. This gave rise to a critical thought that in spite of being accommodated at the best of the hotels and restaurants, why and how could she get infected. That is when Mrs. Bagaria suggested the concept and the name of PeeSafe.

Vikas Bagaria went ahead, conducted every research and came across the fact that around 200 million women are suffering from UTIs (Urinary Tract Infection) globally. So just to keep a check over this major issue among females, a product was then invented by the husband-wife duo Vikash & Srijana Bagaria – ‘PeeSafe’ that has now taken over the global market, recording a count of 5 lakh pieces that have been sold over the last eight months. Giving back a major benefit of 1 million, Peesafe has recorded a reachability in India and even abroad in countries such as Australia, New Zealand, Indonesia, Thailand, Kuwait, Dubai, Qatar, Kenya, Nigeria, and Canada. The product is the first toilet seat sanitizer that contains Isopropyl in the form of drying aerosol, which can be used over the toilet seats as a spray that dries in 5 seconds and kills 99.99% germs and thus helps in reducing the risk of a UTI amongst females.

PeeSafe is now available on all major e-commerce websites such as Amazon, Flipkart, Nykaa, SafetyKart, as well as at the retail outlets of Le Marche, 98.4 Pharmacy, WH Smith, Global Healthline etc.

Well, the team of Business Alligators got the opportunity to get candid in an interview with none other than Mr. Bagaria. It was an honorable and learning experience talking to this great man, who is on a mission to provide the world a more pleasant and healthy living, with all his quirky business ideas and inventions. So, let’s polish our concept about this amazing product ‘PeeSafe’ from the creator itself.

Related- How to Develop a Unique Idea

Que- From where do you manage to acquire the knowledge of these many businesses, from being a student of MCA to being the owner of Forklift; from SVR damage prevention to e-commerce SafetyKart & to Hygiene?

Vikas- I come from a  family of entrepreneurs, so one may say that entrepreneurship runs in my blood. I started my first company ‘ForkLift’ in the year 1997. Back in those days, it was a very rare and competitive business in India. What people are starting now, is something I might have already started 20 years back. So once you have that kind of vision of doing something which nobody else is, you are always ahead of everyone. I strongly believe in my family values; the way we have been brought up gives us the ability to take risks and to look out for business opportunities that are challenging. Once you grow, you develop a niche for yourself and start commanding over the market.

The hunger for doing more resulted into a joint venture with an American company in 2002 that resulted in the inception of SRV Damage Preventions Pvt. Ltd. Upto the first 18 months, I was just promoting the product, while it was finally in 2002 that I made my first sale. I was 10 or 15 years ahead of the then-existing technology. My second business venture ‘SafetyKart’ which then became India’s first online venture offering personal safety products, was inspired by the Nirbhaya case.

Travelling around the world, meeting people, taking up challenges and risks, and the hunger to do more kept me learning from different verticals. And that is how I continued developing business after business from scratch.

Que- How safe is PeeSafe to use as it has chemicals in it and who figured out the right combination of chemicals for PeeSafe?

Vikas- It only contains Isopropyl alcohol (IPA) which works just like a hand sanitizer. It is in the purest form when you put it on a surface. It disinfects the surface and evaporates, so it doesn’t come in contact with the skin. However, even when it does get in contact with the skin, it is 100% safe as it is government lab tested under the approval of FDA.

Well, I figured out the right combination of the chemical. As the saying goes “Necessity is the mother of invention.” Due to a sound Business mind and several years of experience, I knew exactly where to go and who should I talk to. I went ahead, met the doctors, visited a  few labs, talked to them, did the testings and thus created a product. “It’s all about the intent not about the education.”

Related- How to File a Patent?

Que- How about your investment in PeeSafe? Who others have invested in PeeSafe?

Vikas- I have already invested millions of dollars from my funds and we have already raised a million dollars. Also, we have recently signed an agreement with the CGG Company of Doha, Qatar.

India’s one of the most prolific investors, Dheeraj Jain, is my co-founder/partner for PeeSafe, who is also the Managing Partner of Redcliff Capital. We also have Mr. Gobind Rajan Parthasarthi, the ex-CEO of Freecharge; also, the senior VP of Unilever, Amit Choudhary, who is a Managing Partner of Motilal Oswal venture funds; Rahul Maroli who is a senior vice president of Ola, and many other investors who believe in the concept & me.

Que- Who are your target audience?

Vikas- Our research led to the information that approximately 200 million women globally suffer from UTIs. We aim to target them. Also, the aristocrats of the society and the business class travelers.

Related- How to Filter Right Sales Prospects for Bigger Profits?

Que- Can you please explain us the concept of becoming the brand ambassador of PeeSafe?

Vikas- Actually, it’s about inviting different people from different cities no matter whether they are housewives, retired personnels, students or any working professionals, anyone can become the brand ambassador of their respective cities and can earn 30% on the investment of Rs 10,000/- or more.

First, we are looking for someone across the city or colleges with a knack of marketing and sales. Someone with business communication skills, to be able to market the brand amongst gynecologists, restaurants, and corporate houses by conducting meetings with the aim of spreading awareness about the brand and its concept; and most importantly about the necessity of personal and intimate care hygiene.

Secondly, we ran a ‘PeeSafe Sanitized Washroom Programme’ on World Toilet Day which was on 19th November in which 100 different facilities such as cafes, restaurants and PR companies came forward and got their washroom certified by us. Our campaign involved giving them a 300ml bottle of our product and a certificate, along with a checklist so that whenever someone uses the washroom they can spray it before and after visiting the bathroom to maintain the hygiene.

Que- What is the Key to become a successful serial entrepreneur?

Vikas- Risk taking ability, passion, patience, hunger to do more. It is extremely important to have a strong team who you believe in and trust that they have the power to perform well. Apart from this, I would like to say that I am very lucky to have people working with me since past 15 years. They started from scratch and are now earning in lakhs. Last but not the least, the mantra is to finish what you started, without giving up in between.

Que- How do you make the right choice of people while hiring?

Vikas- I give 3 months to people. In 3 months you will be able to judge whether the person is right or not. Once you find the right person, make sure they earn more than you or do have an equal share of earning. If they are putting their 100% and even if you earn a single penny, try to share it with them, because you are being profited with the valuation of the company but they aren’t. So, in terms of money, respect, trust, and power if you can balance it then it’s the best you could do. I have more than 35 people working with me since last 15 years.

Que- How do you balance your work life, as you are running lot many businesses at a time?

Vikas- Review! You have to be very strong in terms of your business reviews. I don’t believe in interfering with someone else’s job. I have CEOs for different businesses, and I have a system where I review the business weekly or monthly. All I am concerned with is the growth. Whether it is 5% month by month or 10%, as long as they are able to afford the bills, I am perfectly fine. This is a way to turn a scratch into a sustainable business. No company apart from PeeSafe has any investors apart from me investing all alone. Apart from this, I am a complete sports person, I am a photographer, a long-distance cyclist, jeeper, quizzer and a technology freak.

Que- Which is your favorite book?

Vikas- I don’t read books, instead, I read people and life. People are the greatest books you can have and I learn from every aspect of life. I learn from those people who earn less but are still happy, they are the best teachers in the world.

Que- Any advice for the budding entrepreneurs?

Vikas- Be honest with yourself and treat people equally. Don’t celebrate the funding you get, it’s not a thing to celebrate, but in fact, the biggest debt that you take. Celebrate exit, that’s where you earn the profit. Have faith in yourself and people. Set a proper timeline prior to which you won’t give up and will keep trying. Make sure to give your 100%. And lastly keep your honesty level always up, never ever do anything by going against the law.